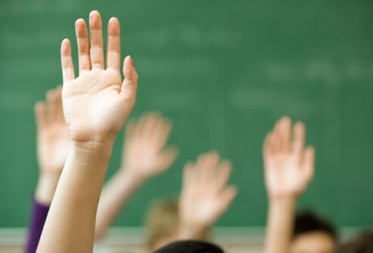 I’ve been thinking about democracy lately. I’ve been questioning it. Not because I don’t believe in the freedom and power of the people. But because this particularly ugly Presidential race has people so polarized, and I’ve never felt so baffled by what the other half of this country is thinking. Admittedly, I’m not a fan of Donald Trump. But this is a close race; which leaves me wondering about a very large population who supports this man. Democracy suddenly feels a little precarious.

I always look forward to the election years in my Pre-K classroom. As an early childhood educator, I see them as an opportunity to talk to the kids about the process of voting and ultimately, the concept of democracy. By nature, 5 year-old children are inherently self-interested and in search of control, so they like the idea of voting with all its accompanying influence and power.

We demonstrate the process by having kids vote for things like favorite ice cream flavors. We ask the minority voters: “Hmm. What do you like about pistachio ice cream?” The other kids all listen, curious to hear, open to learning about another’s unpopular preference. Eventually, we graduate to heftier topics like which books the kids want to read for classroom book club and the direction of our curriculum studies.

At its core, the democratic process is supposed to be about every individual in the community having some power over decisions by way of free elections. Of course, there will always be those in the minority who must concede when the majority votes the other way. So, the flip side of democracy requires respecting another point of view and, in a perfect world, healthy dialogue amidst conflicting opinions.

In a 2013 article in The Guardian, Danielle Allen, political theorist and Professor of Government at Harvard, argues: “In a democracy, the more people from different backgrounds trust each other, the better off their society. So, for nations to flourish, people need to learn how to get along with strangers.”

She was talking about how you cannot have freedom without equality, and goes on to say that inequality undermines democracy. But what is most pertinent in her argument is the idea that the way a group works together is paramount to any particular goal. “Bridging rather than bonding”, she writes, is what matters for the power and efficacy of a democratic system. “The more bridging relationships in a society, the more that society appears democratic, egalitarian and connected,” Allen states.

All of which brings me back to my premise on classroom community. In a strong community, no matter how many different points of view, there is inherent respect and trust. Children that learn to work through different opinions and conflicts together, by way of healthy discussion and expression, are by definition able to accept one another’s belief systems. This makes is easier to concede when your vote isn’t in the majority, and it makes it easier to bring the two sides together in common understanding and empathy.

We had a mock Presidential election before the school year ended. We went around the room and each child voted. Mind you, this is Cambridge, so the Hilary votes quickly added up. We had a few Trump supporters (the kids thought his name was Donald Trumpet). Our final vote was a little boy. His mother happens to be a political theorist and Government Professor at Harvard and an ardent and outspoken opponent of Donald Trump. He gave a confident thumbs up for Donald Trump(et). Because after all, in the end, this is a democracy we live in.

This entry was posted in Uncategorized. Bookmark the permalink.

1 Response to Classroom Community and Democracy