Why the Village Matters 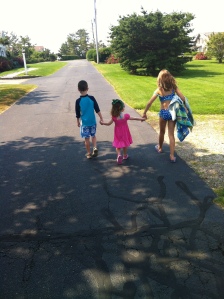 In lieu of having a classroom of kids to inspire my blog this summer, I have been getting all sorts of ideas about community through my nieces and nephew.  I have a three year-old niece, an only child who has not yet started preschool. Her exposure to other children is somewhat limited, but she has sophisticated play skills, a fabulously creative imagination, and excellent language. All which benefit her greatly when she is in the company of her older cousins, lets call them precocious one and precocious two!  The cousins, girl and boy siblings, ages 10 and 7 respectively, are also very socially connected children; extremely empathetic, fun loving, and curious about the world around them.

It has been particularly interesting watching my 7 year-old nephew interact with his 3 year-old cousin.  He is accustomed to being the youngest in his family – sibling to an older sister who holds the world in the palm of her hand.   Yet with his cousin, he gets to take on a different role and be a different kid.  He gets to be the big one with all the experience and wisdom.  And he is visibly pleased with the opportunity to impart some influence on his younger cousin.  He takes a great deal of pride in his relationship with her and is remarkably kind and connected in his interactions with her, meeting her just where she; leading her in play, explaining things patiently to her, and basking in her adoration of him.

The other day, she was crying and fussing about not wanting to take a bath and in the middle of his feverish pedaling down the driveway, my nephew screeched his bike to a halt, threw the kickstand down, and announced confidently:  “I”ll take care of this problem.”  We all watched as he marched into the house.  Several seconds later, the crying stopped.   He returned moments later looking valiant, hopped on his bike, and sped off.

For my little niece, the chance to be with other, older children – particularly family- is a formative learning experience.  You can’t help but feel exhausted as you observe her scurrying to keep up with her big cousins; trying to process what is going on with their fast-moving play, complex language, and nuanced interactions. She doesn’t miss a thing whether she is rushing behind them into the waves at the beach, joining in their imaginary play games, observing them squabbling with each other, or being mesmerized by their masterful negotiation with their parents.

I have actually witnessed my niece talking aloud to herself as she internalizes what is going on with her big cousins in her effort to keep up. Incidentally, this “self narration” is a very intelligent and effective tool for children to use as they make sense of the often chaotic world around them. Child development theorist Lev Vygotsky coined the phrase “private speech.” He was referring to children speaking aloud to guide important cognitive functions, such as, planning, monitoring, guiding oneself while engaging in various activities (kind of like when we adults talk to ourselves as we’re getting organized). For my niece, this literal talking herself through something is actually assisting her own development and consequently helping her keep up with the big kids.  Very resourceful!

In my classroom, I have found that for children with special needs, this kind of “sports casting” as it’s called is very useful in helping children understand the experience they are having.  So if the child lacks the capacity of speech,  a teacher can fill in and speak aloud for the child.  It is literally just stating the facts of what is going on so children can make sense of their experience.    (stay tuned for more on this topic in a future blog post)

I write about my nephew and nieces to give a small example of how community can be found in many places, and how important it is for children to have exposure to relationships outside the immediate family.  It gives them a chance to try on a different role, be a different person, and take on new responsibilities.  It allows them to break out of the mold we often get trapped in with our own families.  In the classroom, children are expected to be on a level playing field, all equally responsible and capable. It is their opportunity to show who they really are and can be – not the oldest, not the youngest – but their own independent self, contributing in an important way to a larger community.

This entry was posted in Uncategorized. Bookmark the permalink.